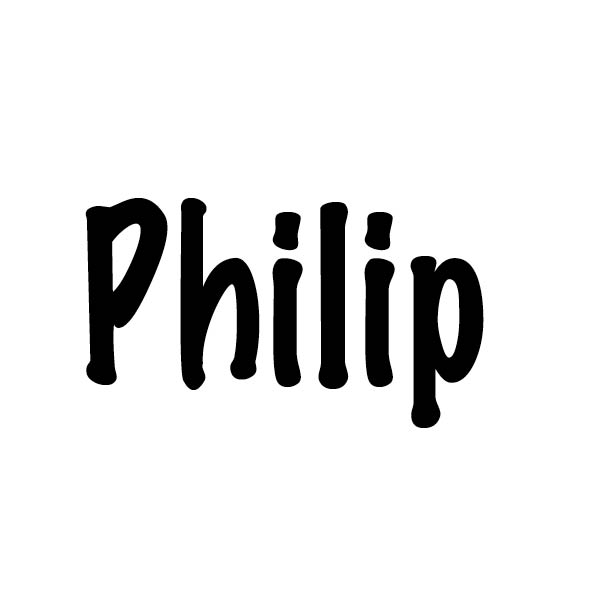 The Twelve Apostles of Jesus: Philip

Our attention is turned towards the Apostle Philip today. To learn more about Peter, Andrew, James, or John, click on their name.

Few references are found in scripture about Philip the Apostle. He is only mentioned in the listings of the Twelve Apostles (Matthew 10:3; Mark 3:18; Luke 6:14) found in the Synoptic Gospels. However, the Gospel of John contains several accounts highlighting Philip.

“The next day Jesus decided to leave for Galilee. Finding Philip, he said to him, “Follow me.” Philip, like Andrew and Peter, was from the town of Bethsaida.” John 1:43-44

Growing up in a coastal village, Philip probably knew how to fish. The biblical texts are quiet concerning his occupation but he might have been a fisherman like the others we have studied. Bethsaida means “House of the Fisher” and was located on the northern shore of the Sea of Galilee about 3 1/2 miles from Capernaum. This ancient fishing village most likely had a small population. Capernaum was a much larger town and had approximately 1,500 inhabitants. Therefore, the possibility exists that Philip would’ve known Peter and Andrew before being called by Jesus. I also think that Philip and John knew one another since John’s gospel contains the most references about him.

“Philip found Nathanael and told him, “We have found the one Moses wrote about in the Law, and about whom the prophets also wrote -Jesus of Nazareth, the son of Joseph.” “Nazareth! Can anything good come from there?” Nathanael asked. “Come and see,” said Philip.”John 1:45-46

Like Andrew, who couldn’t wait to share the news of Jesus with his brother (John 1:41), Philip went and found his friend Nathanael (Bartholomew) to tell him about Jesus. Philip recognized in Jesus the characteristics of the Messiah that the Jews had been awaiting. He had an open and seeking heart that knew Jesus was special.

“Now there were some Greeks among those who went up to worship at the Feast. They came to Philip, who was from Bethsaida in Galilee, with a request. “Sir,” they said, “we would like to see Jesus.” Philip went to tell Andrew; Andrew and Philip in turn told Jesus.” John 12:20-22

Passover was the celebration that the Greeks were attending. They may have been proselytes to Judaism or only believers in God that came to worship in the synagogue during the Feast. The verse implies that these Greeks approached Philip specifically. Maybe, he was the most accessible of the Apostles to these men or maybe, he was chosen because he had a Greek name. Philip means “lover of horses”. Since scripture doesn’t record any biographical information about Philip, speculation among scholars abounds about why he has a Greek name and not a Hebrew name. Curious, isn’t it? These verses also reveal that either Philip was hesitant to approach Jesus about their request and sought Andrew’s help or that a chain of command existed among the apostles.

“When Jesus looked up and saw a great crowd coming toward him, he said to Philip, “Where shall we buy bread for these people to eat?” He asked this only to test him, for he already had in mind what he was going to do. Philip answered him, “It would take more than half a year’s wages to buy enough bread for each one to have a bite!” John 6:5-7

A crowd had been following Jesus all day. Evening approached and the disciples’ suggested to Jesus that he send the crowds home to eat (Matthew 14:15). Jesus turned to Philip and asked how they should manage feeding the people. Was he wondering if Philip would think outside of the box or that he would rely on normal means? They were located close to Bethsaida so perhaps Jesus felt Philip would know the best local place for food. Philip did show off his math skills by calculating the cost and their deficit to meet the need. He would never have imagined the miracle he was about to witness as Jesus took the five small loaves of bread and the two fish and fed this hungry crowd of five thousand. Isn’t that the point? Jesus was revealing to Philip that he could provide abundantly.

What Jesus had been telling his disciples prior to these verses was incredibly confusing, sorrow-inducing, and mind-blowing for them. He had washed their feet, had told them that one of their own number would betray him, had told them that he was leaving them, and had tried to comfort them in their confusion and grief over all he had stated. Philip, wanting to make certain they would be with him and know him, made a request of Jesus that for a Jew would be considered an impossibility. No one had ever seen God and lived with the exception of Moses seeing the back of God as He passed by (Exodus 33:22-23). Yet, Jesus states “[a]nyone who has seen me has seen the Father.” Philip had seen many miracles and had walked with Jesus a long time. He had quickly followed him in the beginning and recognized that Jesus was the One of whom the Law and the prophets had spoken. But Philip still struggled with complete belief, trust, and understanding about who Jesus was. Jesus wanted Philip to stretch his mind and heart and believe.

References: The NIV Study Bible Zondervan Publishing House 1985; Twelve Ordinary Men by John F. MacArthur; The Search for the Twelve Apostles by William S. McBirnie;The Land and the Book by Charles R. Page II and Carl A. Volz; The Daily Study Bible Series on the Gospels of Matthew, Mark, Luke, and John by William Barclay; blueletterbible.org