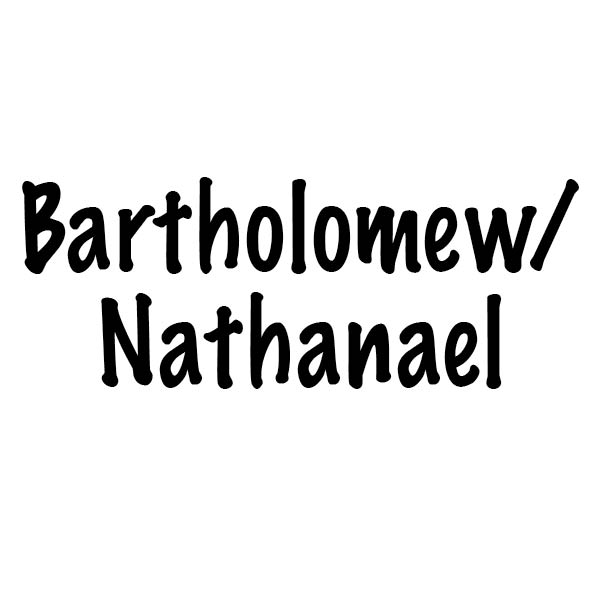 The Twelve Apostles of Jesus: Bartholomew/Nathanael

The summer series on The Twelve Apostles of Jesus reaches the halfway mark today as we learn about the sixth apostle. This apostle is known by two names: Bartholomew and Nathanael. In the Synoptic gospels, he is called Bartholomew but in the Gospel of John, he is referred to as Nathanael. Scholars, through a process of connecting the dots, believe these two names represent the same man.

The Bible doesn’t contain much information about Bartholomew/Nathanael. Most of the information we have about him is found in John’s Gospel. His name, Bartholomew, is of Chaldee origin and means “son of Tolmai or Ptolemy ” which only reveals to us his father’s title or name. Nathanael, on the other hand, means “gift of God.” Based on the meanings of these two names, scholars have concluded that Nathanael must have been his personal name while Bartholomew was a title identifying him with his father. I will refer to him as Nathanael throughout the rest of this post.

“Philip found Nathanael and told him, “We have found the one Moses wrote about in the Law, and about whom the prophets also wrote -Jesus of Nazareth, the son of Joseph.” “Nazareth! Can anything good come from there?” Nathanael asked. “Come and see,” said Philip. When Jesus saw Nathanael approaching, he said of him, “Here is a true Israelite, in whom there is nothing false.” “How do you know me?” Nathanael asked. Jesus answered, “I saw you while you were still under the fig tree before Philip called you.” Then Nathanael declared, “Rabbi, you are the Son of God; you are the King of Israel.” Jesus said, “You believe because I told you I saw you under the fig tree. You shall see greater things than that.” John 1:45-50

Nathanael obviously didn’t think too highly of Nazareth according to this passage. He was from Cana in Galilee which was 3 1/2 hours northwest of Nazareth (John 21:1-3). Most of the accounts in scripture about Nathanael place him in close association with Philip. I think we can safely assume they were friends. I know when I experience something life changing I can’t wait to tell my friends and family. I think Philip was no exception. He wanted to share Jesus with his friend. But Nathanael was cautious and skeptical about this huge claim Philip made. He wanted to meet Jesus before he made the same proclamation.

Fig trees provided excellent shade from the sun and a common practice was to sit under the tree’s branches to contemplate and meditate on scripture. Perhaps Nathanael was doing just that when Philip called out to him. What inspired Nathanael to declare that Jesus was the Son of God? Nathanael’s heart must have been open, expectant, and prepared to recognize the Messiah when he came. Some of that time he also spent contemplating on the scriptures might have helped. As Jesus approached Nathanael, he called him “a true Israelite, in whom there is nothing false.” Jesus saw Nathanael as a man who lived out what he believed. He recognized Nathanael to be a man who was honest, simple, and trusting. I can almost hear the surprise or even wariness in Nathanael’s voice when he asked Jesus how he knew him. Can’t you? Jesus responds to Nathanael by telling him; “I saw you … before Philip called you.” Jesus knew him before Nathanael even knew about Jesus. The same kind of knowing that caused David to write this verse;

“O LORD, you have searched me and you know me. You know when I sit and when I rise; you perceive my thoughts from afar. You discern my going out and my lying down; you are familiar with all my ways.” Psalm 139:1-3

Jesus even told the Twelve that God was so acquainted with them that He had numbered every hair on their head (Matthew 10:30). Jesus knows us and waits for us to hear the call and recognize him. That’s what caused Nathanael to say Jesus was the Son of God.

References: The NIV Study Bible Zondervan Publishing House 1985; Twelve Ordinary Men by John F. MacArthur; The Search for the Twelve Apostles by William S. McBirnie;The Land and the Book by Charles R. Page II and Carl A. Volz; The Daily Study Bible Series on the Gospels of Matthew, Mark, Luke, and John by William Barclay; blueletterbible.org

Lights of the City by Phil Driscoll