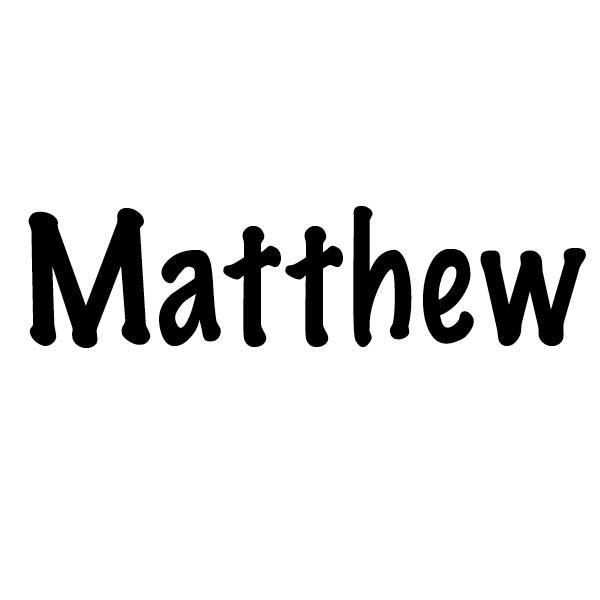 The Twelve Apostles of Jesus: Matthew

Just like the Apostle Bartholomew/Nathanael we studied last week, this week’s apostle was also called by two names.  Matthew, whose name means “gift of Jehovah,” is also referred to as Levi which means “joined”. I will use the most commonly used name, Matthew, throughout this post.

In the ancient world, a man often had two names. Matthew is identified by the name “Matthew” in all of the listings of the twelve apostles (Matthew 10:3; Mark 3:18, Luke 6:15; Acts 1:13). But in the passages concerning Jesus’ calling, his name varies among the gospels between Matthew or Levi. No reference singles Matthew out in the gospel of John.

“As Jesus went on from there, he saw a man named Matthew sitting at the tax collector’s booth. “Follow me.” he told him, and Matthew got up and followed him. While Jesus was having dinner at Matthew’s house, many tax collectors and “sinners” came and ate with him and his disciples.When the Pharisees saw this, they asked his disciples, “Why does your teacher eat with tax collectors and sinners?” On hearing this, Jesus said, “It is not the healthy who need a doctor, but the sick. But go and learn what this means:’I desire mercy, not sacrifice.’ For I have not come to call the righteous, but sinners.”” Matthew 9:9-13

“After this, Jesus went out and saw a tax collector by the name of Levi sitting at his tax booth. “Follow me,” Jesus said to him, and Levi got up left everything and followed him. Then Levi held a great banquet for Jesus at his house, and a large crowd of tax collectors and others were eating with them.” Luke 5:27-29

Matthew was the son of Alphaeus (Mark 2:14) and a tax collector for the Roman government. Tax collection, as a form of employment, was used as early as 212 B.C.. These men collected legitimate taxes for the government but they also collected extra fees and pocketed a percentage for themselves.They had a bad reputation of being despicable and resorting to any means necessary to achieve the money whether by malpractice, extortion, or abuse. By virtue of his employment, Matthew was grouped with the lowest levels of society. Jesus spoke to the receptiveness of faith by this level of society when he responded to the chief priests and elders that questioned him about his authority to do the things he was doing.

“”I tell you the truth, the tax collectors and the prostitutes are entering the kingdom of God ahead of you. For John [the Baptist] came to you to show you the way of righteousness, and you did not believe him, but the tax collectors and the prostitutes did. And even after you saw this, you did not repent and believe him.”” Matthew 21:31-32 (brackets mine)

Tax collectors fell into two different categories. The gabbai were general tax collectors who collected property, income and poll taxes. These fees were set so the ability to make extra money was low. The mokhes, on the other hand, collected specific taxes like the duty on goods transported, tolls for roads and bridges, and tariffs. They were able to collect and pocket extra money easily making their jobs more lucrative. The mokhes were divided into two different groups: the great mokhes and the little mokhes. The great mokhes hired others to work for them and the little mokhes were the ones employed to collect the taxes and run the tax booth. Scholars think Matthew was a little mokhes since he was found by Jesus in a tax booth.

“To some who were confident of their own righteousness and looked down on everyone else, Jesus told this parable: “Two men went up to the temple to pray, one a Pharisee and the other a tax collector. The Pharisee stood by himself and prayed: ‘God, I thank you that I am not like other people—robbers, evildoers, adulterers—or even like this tax collector. I fast twice a week and give a tenth of all I get.’ “But the tax collector stood at a distance. He would not even look up to heaven, but beat his breast and said, ‘God, have mercy on me, a sinner.’ “I tell you that this man, rather than the other, went home justified before God. For all those who exalt themselves will be humbled, and those who humble themselves will be exalted.” Luke 18:9-14

In his life, Matthew would have found a place to belong difficult. He was a traitor to his own people, the Jews, because he worked for the Romans. He was also a religious outcast because of his continual dealings with Gentiles. Interaction with them made him continuously ceremonially unclean and unfit for worship. Matthew would have also been a social outcast shunned by all of society for being a tax collector with the exception of those among the lowest rungs of society. With Jesus, Matthew found a place of belonging, a purpose, and an entirely different life from any he could have imagined. He left his old life and all it offered behind when he made the decision to follow Jesus. Matthew had a new life found in the life of his Lord.

Tradition holds that the apostle Matthew wrote the gospel that bears his name sometime between 60-90 A.D.. Newer scholarship, however, points to another possibility over which New Testament scholars debate.

VERSE OF THE DAY
Therefore, since we have been justified through faith, we have peace with God through our Lord Jesus Christ.
Romans 5:1
DailyVerses.net
RECENT POSTS