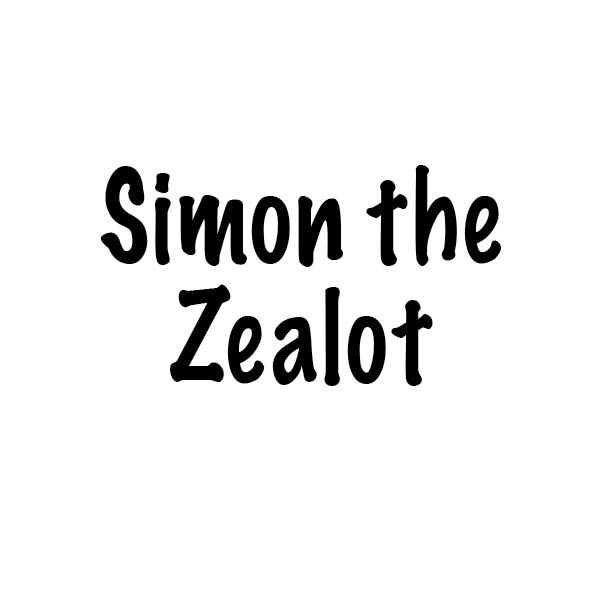 The Twelve Apostles of Jesus: Simon the Zealot

This summer series is almost over. Next week, we’ll take a look at Judas Iscariot. If you’d like to start from the beginning of the series or simply learn about one of the apostles, all of the posts covered in this series can be found under the tab, People of the Bible or by clicking here.

“One of those days Jesus went out to a mountainside to pray, and spent the night praying to God. When morning came, he called his disciples to him and chose twelve of them, whom he also designated apostles: Simon (whom he named Peter), his brother Andrew, James, John, Philip, Bartholomew, Matthew, Thomas, James son of Alphaeus, Simon who was called the Zealot, Judas son of James, and Judas Iscariot, who became a traitor.” Luke 6:12-16

The Jews had three major factions: the Pharisees, the Sadducees, and the Essenes. The Zealots were a smaller faction founded by Judas the Galilean. Firstly, they were modeled after Phinehas, the son of the high priest, who set an example of zeal for God, during a time of apostasy and testing in the wilderness.

“The LORD said to Moses, “Phinehas son of Eleazar, the son of Aaron, the priest, has turned my anger away from the Israelites; for he was as zealous as I am for my honor among them, so that in my zeal I did not put an end to them. Therefore tell him I am making my covenant of peace with him. He and his descendants will have a covenant of a lasting priesthood because he was zealous for the honor of his God and made atonement for the Israelites.”” Numbers 25:10-13

In addition to Phinehas, this group also modeled themselves after the example of Mattathias and his sons who opposed the Greek king Antiochus IV Epiphanes (175-164 BCE). In 6 CE, Judas the Galilaean led a revolt against Rome to oppose the payment of tribute by Israel to the Roman emperor on the grounds that giving tribute to this pagan was treasonous to God. They felt that agreement to the taxation was an acknowledgment of the right of Rome to rule them. What began as a nationalistic movement to defend the life and law of the Jewish people soon became a sect called the Zealots following this revolt. They believed peace would be restored only if the Romans were expelled from their land and the Law of God was adhered to strictly and faithfully. This group even despised their own Jewish brothers and sisters that favored peace and conciliation with Rome. They had no qualms of resorting to aggressive and violent acts to achieve their means. Sometimes, the Zealots allied themselves with a fanatical extremist group known for their terrorism and assassinations called the Sicarii.

A well known story of the Zealots took place at the fortress of Masada. Herod the Great built the fortress at Masada for his winter home and as a southern defense for the kingdom. In 70 CE during the destruction of Jerusalem by the Romans, a group of 967 men, women, and children fled to Masada. The Roman army pursued these fleeing Zealots all the way to Masada. The fortress was difficult to breach so the Romans, under the command of Flavius Silva, held Masada under siege for three years. With the exception of two older women and five children that hid themselves in a well and lived to tell the story, this entire Zealot community chose suicide rather than slavery to Rome. Their actions stand as a symbol of bravery and freedom from slavery.

In addition to Simon, others are also described in scripture as having a zealous temperament. Paul calls himself a religious zealot for God ( Acts 22:3).  While the disciples, perhaps astounded by the clearing of the Temple by Jesus, reflected on a passage from Psalm 69 that they felt Jesus fulfilled.

“His disciples remembered that it is written: “Zeal for your house will consume me.”” John 2:17

Whether Simon was zealous because of his temperament or a Zealot through affiliation, we don’t know with absolute certainty. He did, however, become zealous about being a follower of Jesus. He transformed and redirected his passion into devotion, dedication, and committed obedience to his Lord.

Why were only Jews part of the Twelve Disciples?: Bruxy Cavey