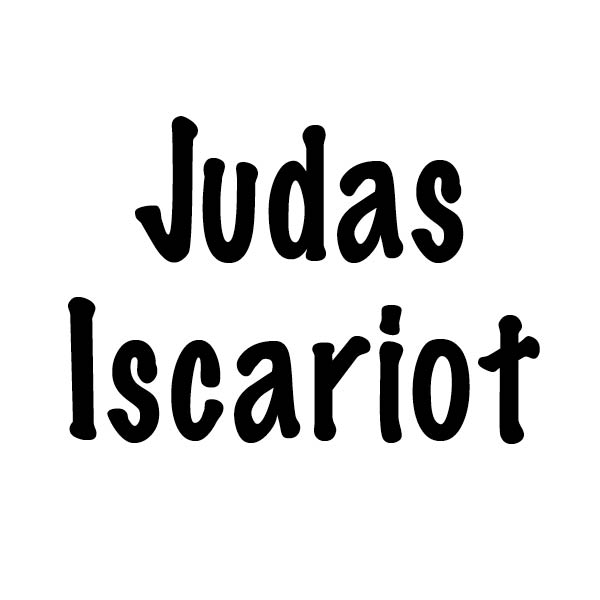 This summer series on The Twelve Apostles of Jesus concludes this week. If you’d like to start from the beginning of the series or simply learn about one of the apostles, all of the posts covered in this series can be found under the tab, People of the Bible or by clicking here.

“One of those days Jesus went out to a mountainside to pray, and spent the night praying to God. When morning came, he called his disciples to him and chose twelve of them, whom he also designated apostles: Simon (whom he named Peter), his brother Andrew, James, John, Philip, Bartholomew, Matthew, Thomas, James son of Alphaeus, Simon who was called the Zealot, Judas son of James, and Judas Iscariot, who became a traitor.” Luke 6:12-16

We all carry labels. Some are benign and shared by many like parent, sibling, or spouse. Other designations are ones that we give ourselves or others give to us. They might be loving nicknames or names chosen to wound or harm. We also have names God calls us such as Forgiven, Redeemed, or Beloved. Judas Iscariot carries a label. In scripture, he is depicted not only as Judas Iscariot but as Judas Iscariot the Betrayer or Judas Iscariot the Traitor. Every mention of him by name in scripture is accompanied by the label of his action. Judas is also known by his hometown. The word Iscariot is not a last name but indicates that he was from Kerioth (Joshua 15:25). The village was located about 15 miles south of Hebron in Israel. Another personal tidbit that can be gleaned from scripture is that his father’s name was Simon (John 6:71).

After Jesus declared himself to be the bread of life (John 6:35), his followers grumbled and were confused by his teaching (John 6:60). Jesus told them that the words he spoke were spirit and life and he knew some of them didn’t believe.

“For Jesus had known from the beginning which of them did not believe and who would betray him. He went on to say, “This is why I told you that no one can come to me unless the Father has enabled him.” From this time many of his disciples turned back and no longer followed him. “You do not want to leave too, do you?” Jesus asked the Twelve. Simon Peter answered him, “Lord, to whom shall we go? You have the words of eternal life. We believe and know that you are the Holy One of God.” Then Jesus replied, “Have I not chosen you, the Twelve? Yet one of you is a devil! (He meant Judas, the son of Simon Iscariot, who, though one of the Twelve, was later to betray him.)” John 6:64-71

Jesus knew the heart of Judas. But he called and loved him anyway. Jesus drew him close to be part of his special group of apostles. John records a prayer of Jesus which he prayed to the Father about the Twelve which includes a curious statement about the purpose of Judas Iscariot’s betrayal.

“While I was with them, I protected them and kept them safe by that name you gave me. None has been lost except the one doomed to destruction so that Scripture would be fulfilled.” John 17:12

To be the one doomed to destruction as the son of perdition was to be lost physically, spiritually or eternally. Peter also reinforces this idea in his address to the group of believers after the Ascension of Jesus when he proposes the replacement of Judas among the Twelve.

“In those days Peter stood up among the believers (a group numbering about a hundred and twenty) and said, “Brothers, the Scripture had to be fulfilled which the Holy Spirit spoke long ago through the mouth of David concerning Judas, who served as guide for those who arrested Jesus —- he was one of our number and shared in this ministry.” Acts 1:15-17

Jesus also placed Judas Iscariot in charge of the group’s money. In this account of a dinner shared in Bethany at the home of Lazarus, Judas reveals his heart and inner motives.

“Here a dinner was given in Jesus’ honor. Martha served, while Lazarus was among those reclining at the table with him. Then Mary took about a pint of pure nard, an expensive perfume; she poured it on Jesus’ feet and wiped his feet with her hair. And the house was filled with the fragrance of the perfume. But one of his disciples, Judas Iscariot, who was later to betray him, objected, “Why wasn’t this perfume sold and the money given to the poor? It was worth a year’s wages. He did not say this because he cared about the poor but because he was a thief; as keeper of the money bag, he used to help himself to what was put into it. “Leave her alone,” Jesus replied. “It was intended that she should save this perfume for the day of my burial. You will always have the poor among you, but you will not always have me.”” John 12:2-8

Judas had been called and chosen like the other eleven apostles. Like them, he was given the ability to drive out evil spirits and heal every disease and sickness (Matthew 10:1). He walked, talked and listened to all that Jesus taught. Yet, somehow, he missed the Way, the Truth, and the Life (John 14:6). Judas struggled not only inwardly but also publicly since John viewed his failings and temptations. Repentance was an issue and belief was an issue. However, none of the apostles saw the signs of betrayal; maybe thievery but not the betrayal of Jesus.

“Then one of the Twelve – the one called Judas Iscariot – went to the chief priests and asked, “What are you willing to give me if I hand him over to you?” So they counted out for him thirty silver coins. From then on Judas watched for an opportunity to hand him over.” Matthew 26:14-16

Following the meal at the home of Lazarus, Judas chose to betray Jesus. He consciously made the decision and acted upon it. Luke states that Satan entered Judas when he went to see the priests about betraying Jesus (Luke 22:1-4). Whether he was prompted by his own motives or the temptations of Satan, Judas’s heart was far from God.

During the last Passover meal with his apostles, Jesus washed their feet and continued teaching them about the example of servanthood. Jesus knew events were about to transpire quickly. He states,

“”Now that I, your Lord and Teacher, have washed your feet, you also should wash one another’s feet. I have set you an example that you should do as I have done for you. I tell you the truth, no servant is greater than his master, nor is a messenger greater than the one who sent him. Now that you know these things, you will be blessed if you do them. I am not referring to all of you; I know those I have chosen. But this is to fulfill the scripture: ‘He who shares my bread has lifted up his heel against me.’ I am telling you now before it happens, so that when it does happen you will believe that I am He.”… After he had said this, Jesus was troubled in spirit and testified, “I tell you the truth, one of you is going to betray me.” His disciples stared at one another, at a loss to know which of them he meant.” John 13:14-22

The others had no clue that Jesus was speaking of Judas Iscariot. His deceit: perfection. Peter motions to John, the disciple whom Jesus loved, to ask and find out. Jesus tells John that the betrayer is the one who accepts the piece of bread offered to him.

“Jesus answered, “It is the one to whom I will give this piece of bread when I have dipped it in the dish.” Then dipping the piece of bread, he gave it to Judas Iscariot, son of Simon. As soon as Judas took the bread, Satan entered into him. “What you are about to do, do quickly,” Jesus told him, but no one at the meal understood why Jesus said this to him. Since Judas had charge of the money, some thought Jesus was telling him to buy what was needed for the Feast, or to give something to the poor. As soon as Judas had taken the bread, he went out. And it was night.” John 13:26-30

Jesus takes the broken piece of matzah, dips it into the mixture of horseradish and charoset which symbolizes the sweetness of God’s redemption in the midst of slavery and leans back into the breast of Judas offering him the first piece called the sop. This morsel given by the host, Jesus, was considered a sign of special friendship or affection. The choicest morsel offered himself as the bread of life and Judas declined the life giving offer. Judas “lifted up his heel” (Psalm 41:9) shattering the relationship. Opportunity still existed for him to change his mind and actions but he didn’t. Judas informed the priests and council that now was their opportune moment.

“So Judas came to the grove, guiding a detachment of soldiers and some officials from the chief priests and Pharisees. They were carrying torches, lanterns and weapons.” John 18:3

“Now the betrayer had arranged a signal with them:”The one I kiss is the man; arrest him and lead him away under guard.” Going at once to Jesus, Judas said, “Rabbi!” and kissed him. The men seized Jesus and arrested him.” Mark 14:44-46

To greet a beloved Rabbi, custom indicated the placing of the both hands on the Rabbi’s shoulders and then the person would lean in to kiss as a sign of affection and respect. Kissing was a sign of friendship not a sign of betrayal. With no shame, Judas came in close, held Jesus long enough to clearly indicate that he was the man, and looked him in the eyes as he betrayed him.

“Early in the morning, all the chief priests and the elders of the people came to the decision to put Jesus to death. They bound him, led him away and handed him over to Pilate, the governor. When Judas, who had betrayed him, saw that Jesus was condemned, he was seized with remorse and returned the thirty silver coins to the chief priests and the elders. “I have sinned,” he said, “for I have betrayed innocent blood.” “What is that to us?” they replied. “That’s your responsibility.” So Judas threw the money into the temple and left. Then he went away and hanged himself.” Matthew 27:1-5

“(With the reward he got for his wickedness, Judas bought a field; there he fell headlong, his body burst open and all his intestines spilled out. Everyone in Jerusalem heard about this, so they called that field in their language Akeldama, that is, Field of Blood.) Acts 1:18-19

Scholars believe that Judas Iscariot wanted more from Jesus. He was looking for a man of war and action, not a man of peace and love. They suggest Judas was also trying to press Jesus into action by betraying him. Through his actions and choices, Judas found himself facing the difficult emotion of regret. He became the first of the Twelve to die but not a martyr’s death for standing firm in his conviction of faith. He also became the only apostle not to achieve sainthood. The remaining apostles under the guidance of the Holy Spirit would vote to replace him with Matthias (Acts 1:26).